Hello! Today I am sharing lots of examples featuring stepped up dimensional die cuts. Be sure to watch my video – I have lots of tips! 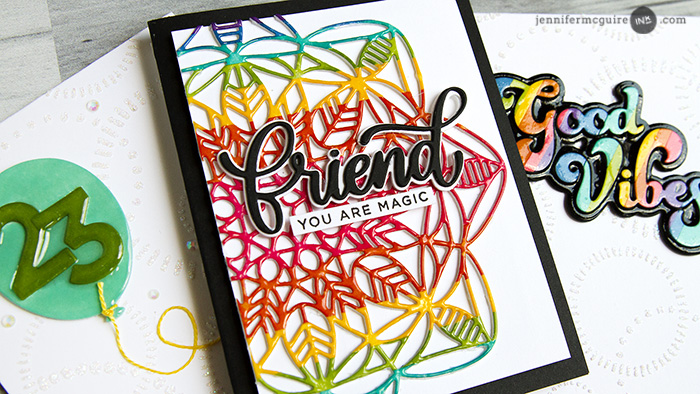 [All supplies are linked in the text below and in the thumbnails at the end of this post. Compensated affiliate links may be used at no cost to you.]

There are many ways to make your die cuts stand out on your card. Today’s tips make a HUGE difference and are well worth the time and effort. You can try just one tip and it alone will look great.

For my first card, I stacked three Simon Says Stamp Balloon die cuts, along with four stacked “23” die cuts from the Simon Says Stamp Everett Numbers Die Set. Stacking is easy with Gina K Connect Glue since the adhesive comes out easily and dries strong and clear. I then covered the dimensional die cuts with five layers of clear embossing powder. That shine is amazing! But keep in mind that the clear embossing darkens the cardstock color.

For the background, I used Cosmic Shimmer Icicle Blue Sparkle Paste over a Simon Says Stamp Jazz Dance Stencil. I also added string that I coated with Gina K Connect Glue so I could force it into a shape and keep it there.

Here is a better look at the shine… 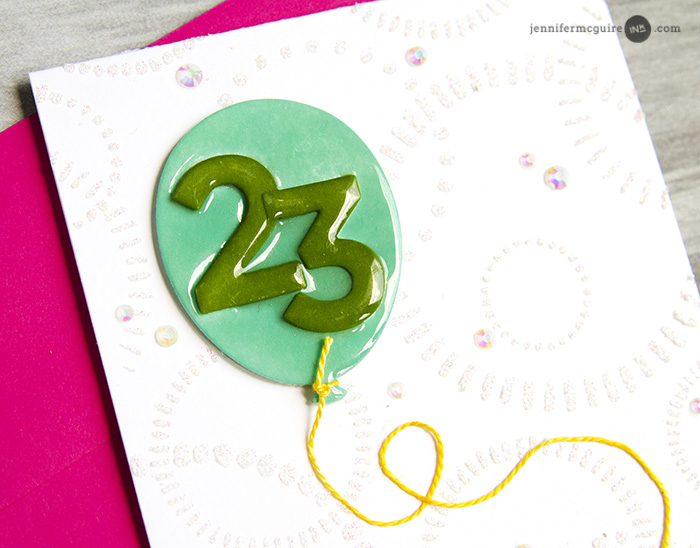 This next example is similar, with a couple difference. This time I used the Simon Says Stamp Everett Letters Dies for “hi” and covered the stacked die cuts with a thick layer of Tonic Crystal Glaze. This takes overnight to dry, but stays more true to the color underneath. 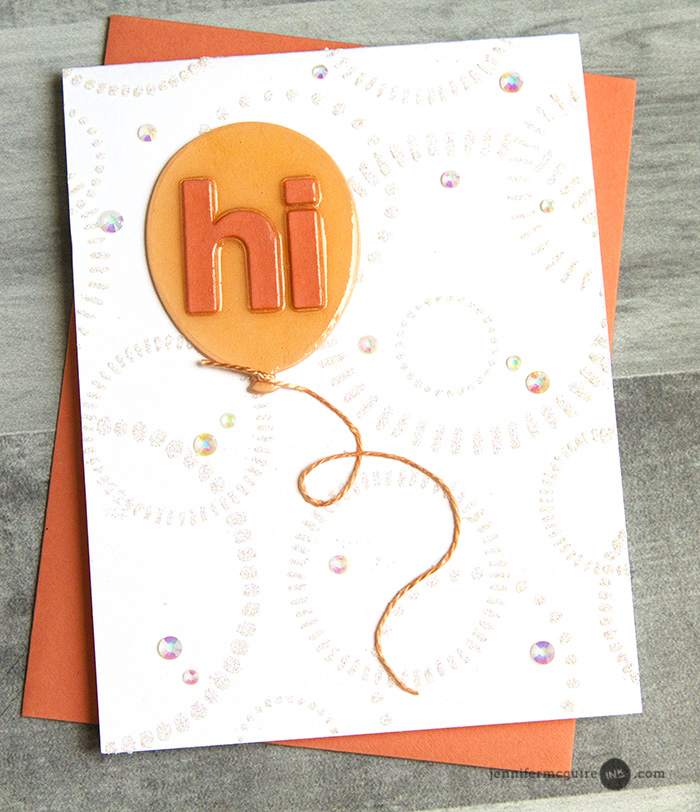 You can see this gives lots of shine. It is a bit less than the heat embossing on the “23” balloon, but it takes less time to apply. 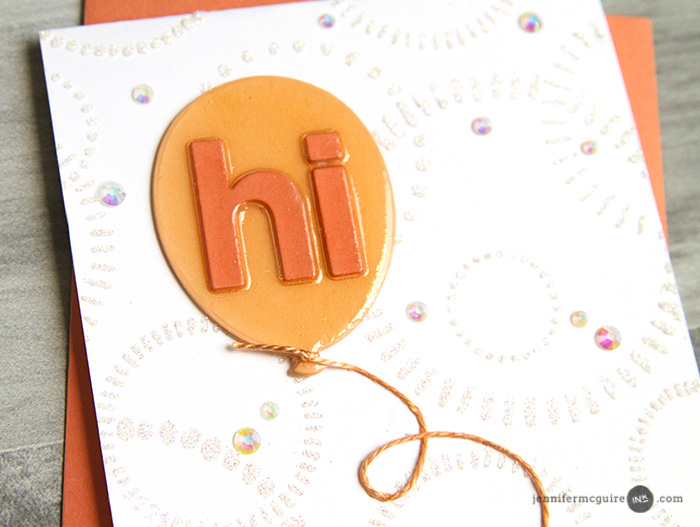 Next, I show a couple ways to add shimmer to the dimensional die cuts. The first option involves covering a stacked die cut with Tonic Aqua Shimmer Pens and then a layer of Tonic Crystal Glaze. This is a great way to make a die cut stand out! I used the new Simon Says Stamp Big Friend Dies along with a sentiment strip from the Simon Says Stamp Simple Sentiments Stamp Set. I assembled the pieces on a stacked Simon Says Stamp Hibiscus Frame Die Cut. 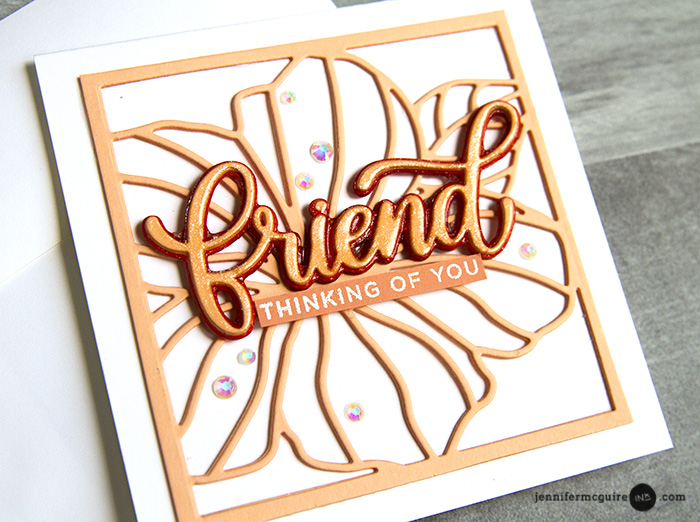 Another option is to use several layers of clear embossing powder… with one layer of Judikins Sparkle Embossing Powder on top. (If you use the sparkle powder for all of the layers, it won’t let the cardstock show through much.) This is much faster to do but darkens the color. 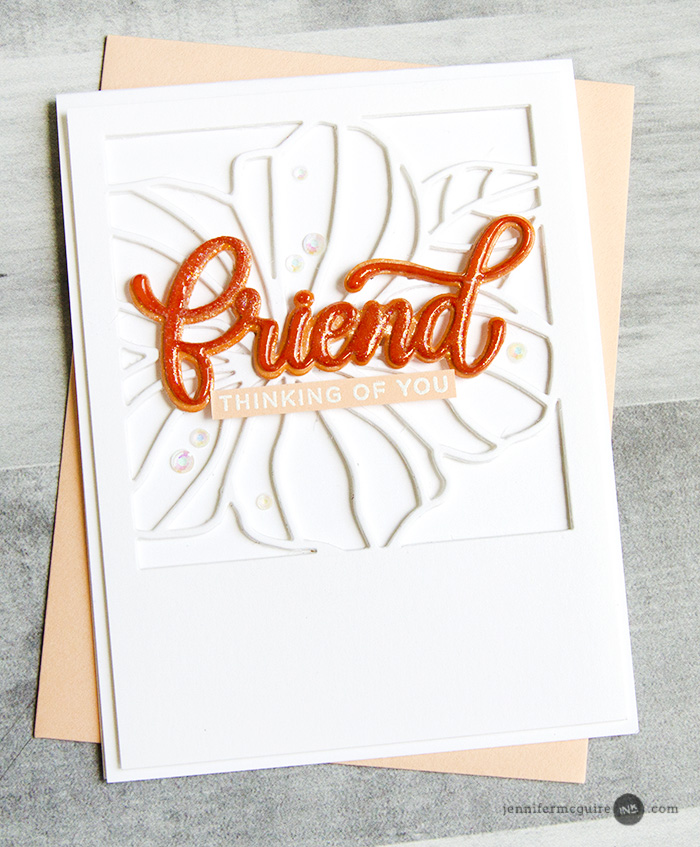 Another way to step up your die cuts is to create multi-color pieces. This is a great opportunity to use up scraps! For this card, I used Scotch Tape on the back of three strips of cardstock to hold them together. I then die cut my “patterned paper” with the Simon Says Stamp Dude Dies. It die cuts beautifully! I stacked it with a few more “dude” die cuts and on a few black shadow die cuts. I then covered it with Tonic Crystal Glaze. 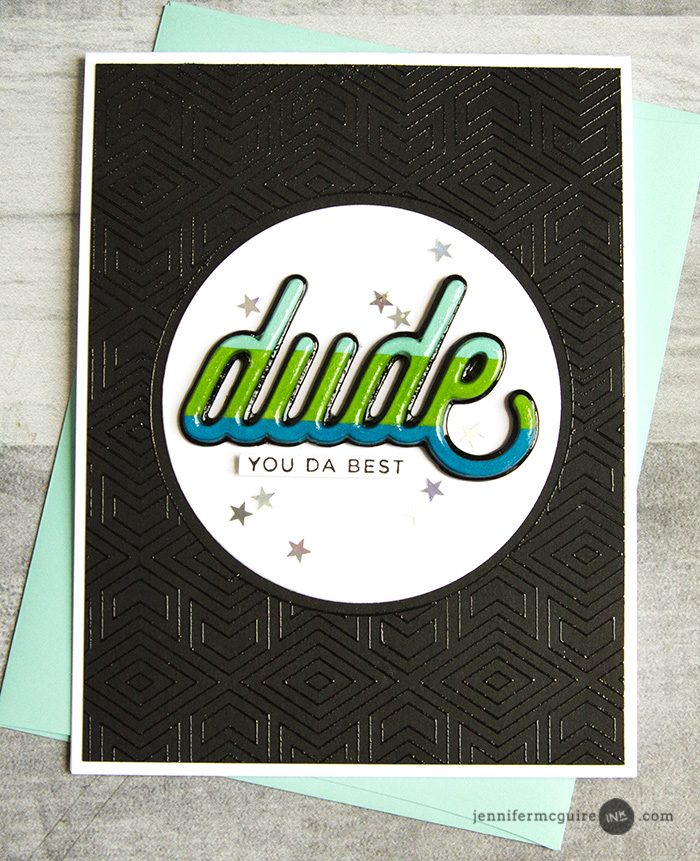 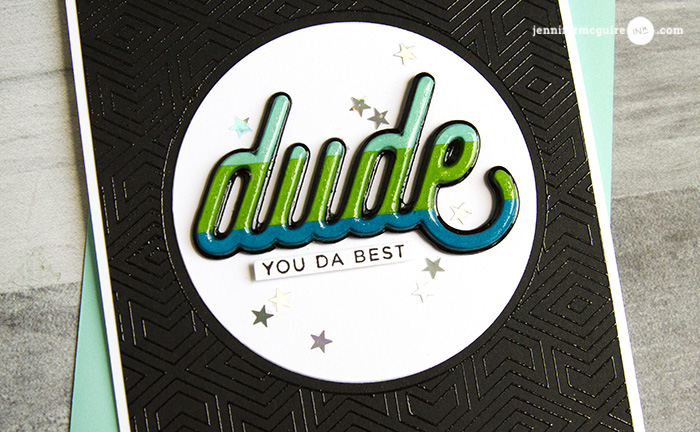 To create a bunch of rainbow die cuts, I first made my own “patterned paper” by taping strips together. I had enough to make several cards!

I also created a rainbow stacked die cut using the Simon Says Stamp Big Friend Dies… but covered it with lots of clear embossing. You can see this made the die cuts darker, but I still like it! I added it to a notecard along with a white Simon Says Stamp Debra die cut… and a Simon Says Stamp Simple sentiment. 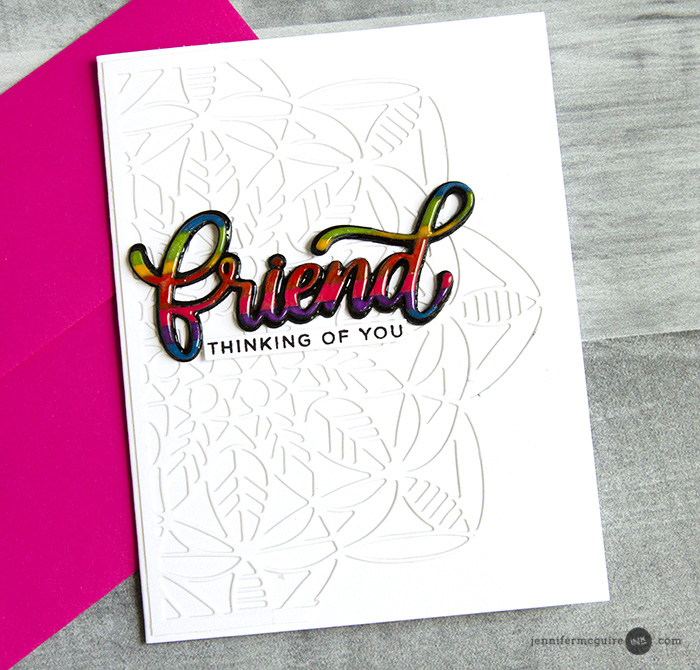 One advantage to using several coats of clear embossing for dimensional shine? It is fast for large, intricate die cuts! Check out that Simon Says Stamp Debra die cut background… I am loving that look! 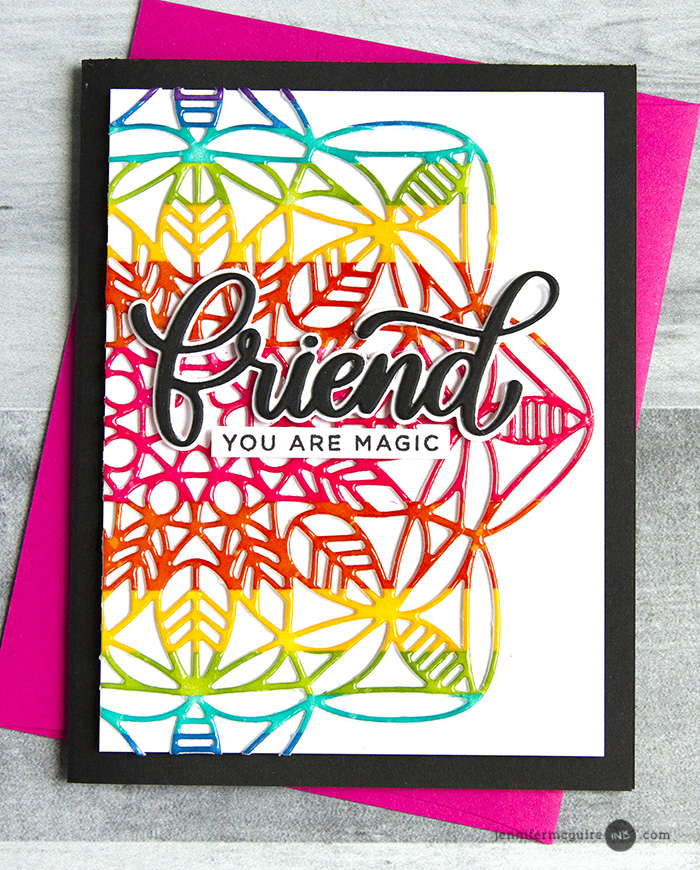 You can also use Ranger Glossy Accents to cover die cuts. The results are rounded, shiny, and smooth. This card features the Simon Says Stamp Everett Letters Dies, Debra Die, and a little sentiment from the Big Thanks Words Stamp Set. 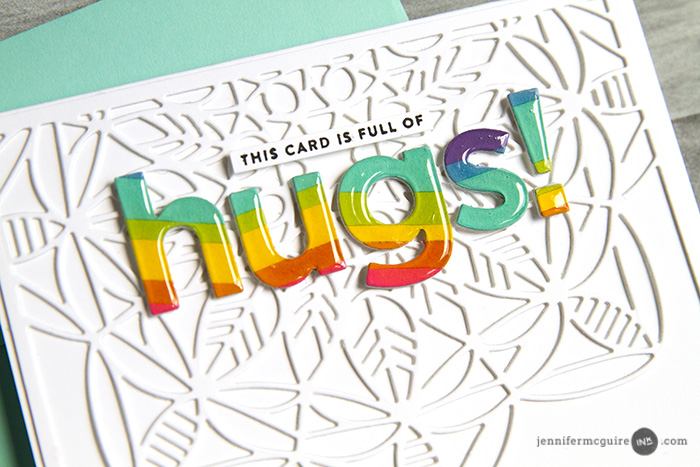 My last example features my favorite dimensional die cut piece. It looks amazing in real life! I stacked several circle die cuts along with Simon Says Stamp Miss You Block Die Cuts. I then topped the “miss you” with glitter cardstock. Finally, I coated it with a heavy layer of Ranger Glossy Accents. The background is from the Simon Says Stamp Beachy Waves Stamp. 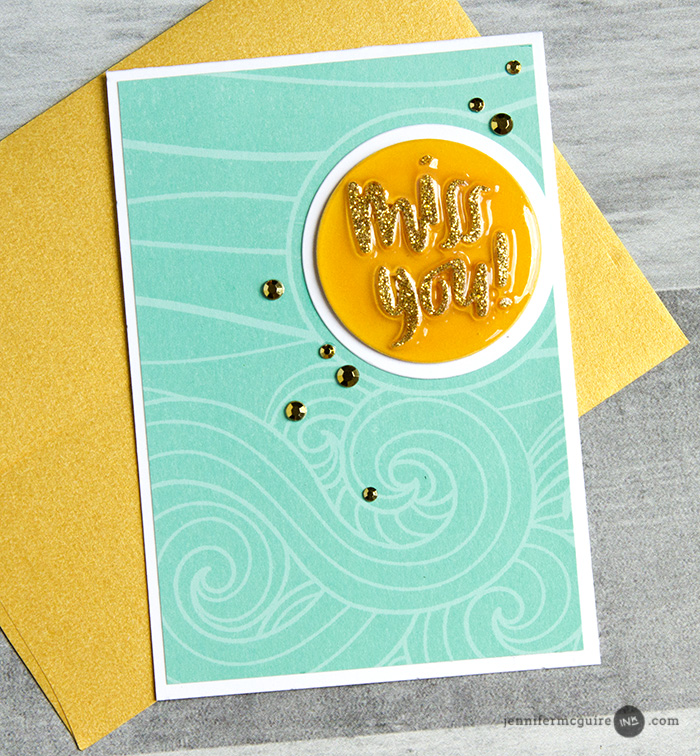 I am impressed how the gloss coats the dimension… 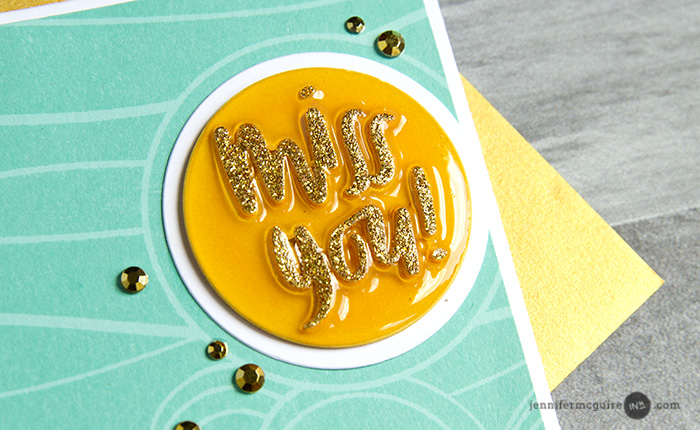 Most of the products I used today are from the new Simon Says Stamp Good Vibes Release. Lots of great products! Find them HERE.

Want to find the products I used? I have listed them below. (Compensated affiliate links used at no cost to you. Thank you! Affiliate and product disclosure can be found here. All products were personally purchased except those with an asterisk or Simon Says Stamp branded. As always, this post was NOT paid for or sponsored.) 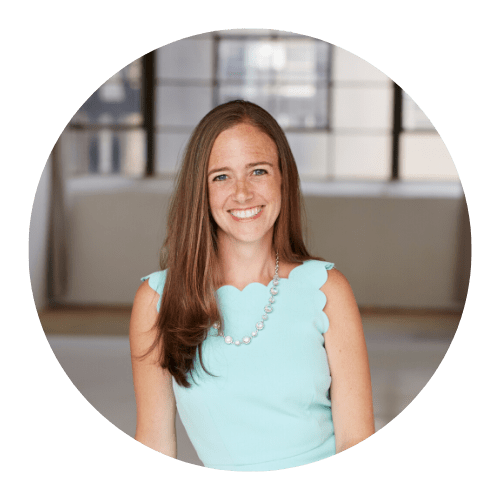 We use cookies to ensure that we give you the best experience on our website.
READ MOREACCEPT
Manage consent

This website uses cookies to improve your experience while you navigate through the website. Out of these, the cookies that are categorized as necessary are stored on your browser as they are essential for the working of basic functionalities of the website. We also use third-party cookies that help us analyze and understand how you use this website. These cookies will be stored in your browser only with your consent. You also have the option to opt-out of these cookies. But opting out of some of these cookies may affect your browsing experience.
Necessary Always Enabled
Necessary cookies are absolutely essential for the website to function properly. These cookies ensure basic functionalities and security features of the website, anonymously.
Functional
Functional cookies help to perform certain functionalities like sharing the content of the website on social media platforms, collect feedbacks, and other third-party features.
Performance
Performance cookies are used to understand and analyze the key performance indexes of the website which helps in delivering a better user experience for the visitors.
Analytics
Analytical cookies are used to understand how visitors interact with the website. These cookies help provide information on metrics the number of visitors, bounce rate, traffic source, etc.
Advertisement
Advertisement cookies are used to provide visitors with relevant ads and marketing campaigns. These cookies track visitors across websites and collect information to provide customized ads.
Others
Other uncategorized cookies are those that are being analyzed and have not been classified into a category as yet.
SAVE & ACCEPT
Stay In Touch With JM Ink!
Sign up for my email list to get updates